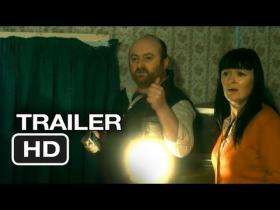 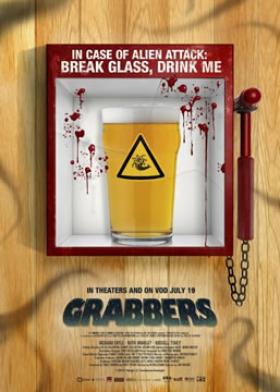 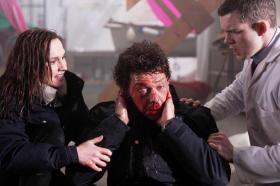 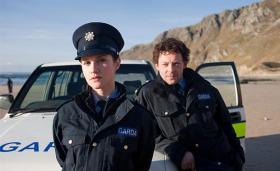 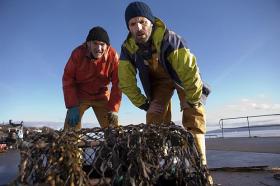 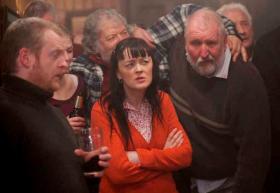 Garda Ciarán O'Shea (Richard Coyle), an alcoholic, initially resents his new partner, Garda Lisa Nolan (Ruth Bradley), a workaholic seeking to impress her superiors by volunteering for temporary duty in a remote Irish island. After discovering mutilated whale corpses, the quiet community slowly comes to realise that they're under attack by enormous bloodsucking tentacled creatures from the sea, dubbing them "Grabbers". When Paddy (LalorRoddy), the town drunk, inexplicably survives an attack, the local marine ecologist, Dr. Smith (RusselTovey), theorizes that his high blood alcohol content proved toxic to the Grabbers, who survive on blood and water. O'Shea contacts the mainland, but an oncoming storm prevents any escape or help. The group also realizes the rain will allow the remaining large male Grabber to move about the island freely. Seeking to keep calm in the town, Nolan and O'Shea organize a party at the local pub, intending to keep the island's residents safe but unaware of the danger. Initially hesitant to join in a celebration when no good reason can be offered, the people enthusiastically agree when Brian Maher (David Pearse), the pub owner, offers free drinks. O'Shea volunteers to stay sober so that he can coordinate the towns defenses, and everyone else becomes drunk.

In a drunken stupor, Nolan reveals that she has come to the island to escape the shadow of her more-favoured sister. When they are alone in a squad car, Nolan confesses to O'Shea that she has feelings for him despite turning down his advances earlier. Smith wanders outside the pub and tries to get a picture of the beast, reasoning that his inebriated state will protect him from being eaten. Instead, the monster throws him into the air and kills him. Nolan and O'Shea escape to the pub, where they try to protect the townspeople. Nolan drunkenly reveals the danger they are in while trying to reassure everyone that nothing is trying to kill them. Panicked, they retreat to the second level of the pub, and baby sea monsters take over the first floor. Nolan accidentally sets the pub on fire while trying to sneak out, but she and O'Shea manage to draw the attention of the adult.

O'Shea and Nolan drive to a construction site, and the monster follows them. There, they hope to strand the monster on dry land, as it needs water to survive. Before they can successfully set a trap, the monster arrives and attacks O'Shea. Although wounded, O'Shea survives the attack, and Nolan uses the heavy construction equipment to mount a counter-attack, pinning it at the base of a pit. The monster grabs O'Shea, but before it can eat him he dumps a bottle of Paddy's moonshine into its mouth, sickening it and causing it to release O'Shea. Nolan then ignites nearby explosives with a flare gun, killing the Grabber. As the storm clears up, they return to the town and O'Shea throws away his flask. The film ends with a shot of more sea monster eggs hatching.